Why we created NCNL...By Ricardo Munoz and Jesus Eddie Campa 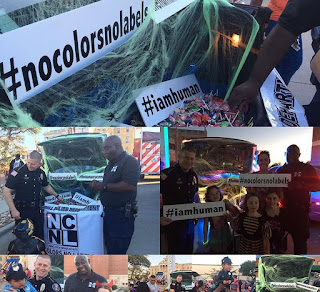 
Growing up in a community that is diverse and vibrant, because of its location and its real estate, sheltered me from the truth of racism. I always knew it existed, as I read about it in our history books, watched it on the news, saw the changes that it was causing, and in the profession I have spent the last 21 years serving in, yet, I had never actually experienced it. It was not until I traveled to a different state that I was exposed to racism firsthand. I was told that I was the wrong color and race to be applying for the top cop position in that community.
After a few days in the community, I realized that I was indeed not welcomed and was only brought in for an interview to meet some affirmative action quota. I was exposed to racism again after becoming the Police Chief of a town in East Texas and was shocked at how openly racism was accepted there.
The main issue here was that it had been going on for so long that it almost seemed to be accepted as natural or normal behavior. I arrived at a time when the anti-police sentiment was beginning to brew heavily around the country.
I was shocked at how several people in the community were treated because of the color of their skin or because of their social-economic status.
In talking to the community, many felt that the police were racially motivated, and did not trust us. The reality was that this was a misconception built on by years of misunderstood criticism on both ends of the spectrum. This is what led me to create the ‘No Colors No Labels Initiative.’ Through education, transparency, partnerships, food, unity and faith. the world could change and unite to put an end to racial misconceptions.
To find out more about NCNL, call (903)935-4543 or email nocolorsnolabels@gmail.com. Follow us on Facebook at http://facebook.com/nocolorsnolabels and on Twitter @nocolorsnolabels. Visit the website at http://ncnl.org.
Thank you,
Jesus “Eddie” Campa