I would like to wish Chief Masterson nothing but the best ass he takes on this very challenging role.  The citizens of his community deserves nothing but the best and I pray that the Chief can deliver.  He is on point when he states that he would rather patrol by himself then to hire the wrong persons. 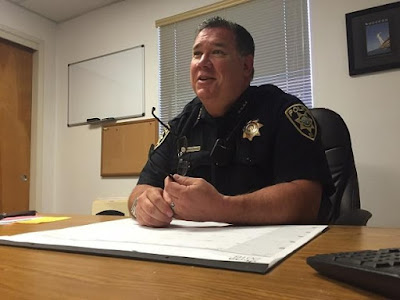 KING CITY, Calif. —King City has another new police chief, adding to a long list of permanent and interim chiefs who have run the department since a department-wide scandal was uncovered more than two years ago.


RELATED
“Everybody wants to put what’s happened in the past to bed and they want someone who’s going to be around a while. They’re looking forward to someone who is going to stay, become part of the community, and I’m hoping to be that person,” said Robert Masterson, who will be officially                                                    sworn in Wednesday night as King City’s new police chief.
Masterson, 50, comes from Tulare County, where he served as chief of police for the College of the Sequoias. Prior to that, he worked with the Tulare County Sheriff’s Department for 20 years.
“I speak from the heart and I act from the heart, that’s all I can do,” Masterson said.
The incoming chief takes over a department that was rocked by scandal two years ago when six cops were arrested, including a former chief and interim chief. The arrests resulted from a towing scandal, death threats, embezzlement and gun charges.
The force has never fully regained the trust of the community and Masterson said that will be a top priority.
“I think the first part we need to do is find out from the people that live in King City, what do you need, what do you want, what do you think we need to do, and then those are our marching orders,” Masterson said.
He said trust won’t be built overnight, it will take some time, and part of that involves changing the culture within the police force and hiring the right people.
“I’d rather drive a patrol car myself than hire an officer that is going to give the city problems down the road and mistreat the people that live here. So I’d rather handle the beat myself than hire that officer and be back in the situation we were two years ago,” Masterson said.
The new chief said another priority will be gang prevention and intervention programs to steer kids away from the gang lifestyle. Masterson said he supports the use of body cameras and is in the process of selecting a new vendor.
Masterson said he brings to the job honesty, integrity, transparency and the fact that he’s in this for the long haul.
“I’m roughly the sixth or seventh chief that sat behind this desk. I hope to be the last one for quite a while. Rest assured, I’m not going to do anything that is going to give the city or people of this town (a reason) to get rid of me,” Masterson said.
at 11:14 AM