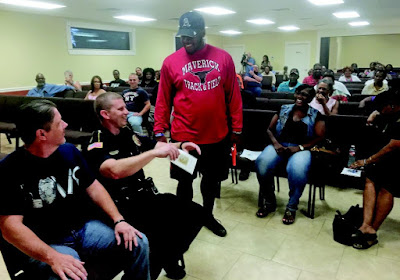 By Robin Y. Richardson  from the Marshall News Me


A roomful of residents turned out for the Marshall Against Violence and Marshall Police Department town hall meeting Wednesday, to begin a dialogue to help strengthen the relationship between civilians and officers.
The idea came about in light of the recent shootings of police in Dallas and Baton Rouge, Louisiana, which were fueled by fatal shootings by police of black men, around the country.
"I definitely want to thank Marshall Police Department, Chief Campa and the officers for their willingness to have an open dialogue with the citizens of Marshall," MAV Founder and President Demetria McFarland said. "On the behalf of the citizens of Marshall, in general, we do not want our children to be fearful of police officers. They need to know that the officers are here to protect and to serve. They put their lives on the line every day to ensure the safety of our city and our community.
"We have to realize that out of every situation, every group, out of everything that we do, here within not only Marshall, in the world, you're going to have a few bad seeds, but not all cops are bad cops," she said, sharing a peaceful encounter she had with an officer during a traffic stop the same day.
In her prayer, Patricia Frazier Butler thanked God for the opportunity to come together as a unit to solve a problem that's bigger than Marshall.
"We thank you, right now, for a different perspective. We thank you thank the law enforcement even understand us, from a different perspective," she said.
Marshall Police Chief Jesus "Eddie" Campa said despite the bad image that's being portrayed of police officers and citizens in the national media, the city of Marshall is making great strides.
"If you look at Marshall, Texas, we've totally changed things around here in Marshall," the police chief said, citing the "No Colors No Labels" initiative that was created to improve race relations.
"We're kind of like the blueprint or the model that the rest of the country should actually be following because of some of the things we're doing here.
"We've came in and built this bridge of trust with our community," Campa said. "We're trying to keep developing (it). That's why we're here today."
The police chief said it broke his heart when a young black woman approached him at the local prayer vigil, held in honor of the fallen Dallas officers.
"She started crying, saying: 'I'm terrified of the police. I don't know what to do. Every time my brother goes out, I'm scared he's not going to come home because the police are out of control.'"
He assured her that those few bad apples weren't in Marshall.
"There's no reason to be afraid of us. We're the good guys," Campa told the mostly all black audience.
"There's a few bad apples everywhere, in everything that you do. In every walk of life there's bad apples, but the thing is there's only 1 percent of that community that's bad."
That's why when retired MPD Officer Scott Beck and McFarland both approached him about hosting an open dialogue with the community, he jumped at the opportunity.
"It made total sense to put something like this together," Campa said. "The purpose of this is to build a bond, educate you on the proper etiquette we want to see when we pull you over. We want to hear from you."
He said MPD is aiming to be the most transparent police department in the nation.
"We're here to remove any preconceived notion that we are racially motivated," said Campa. "If we were, you wouldn't be hosting meetings like this. It's all about building relationships."
Herman Robertson, a volunteer for one of the traffic stop demonstrations conducted during the event, said he appreciates the opportunity to dialogue with the officers because he's tired of being mistreated.
"I know we screw up; I screw up, but, hey, when I ain't done nothing wrong and I'm sitting at my home at my property, on my car, minding my business smoking a cigarette and you don't even ask me my name, you just ask me to turn around and put my hands behind my back… (it's wrong).
"Is that how you do black people?" Robertson asked.
"That's how y'all did me a month ago," he said. "I ain't got nothing against y'all. I'm tired of getting dogged out, and getting slammed down to the pavement and slammed against my car. I'm tired of that. I work every day; I work hard; I do the best I can do."
Campa apologized for any mistreatment, and welcomed residents to file a complaint in his office anytime they felt wronged.
"I don't want that one bad apple to ruin everything I have worked so hard to establish," Campa said. "But, I'm telling you, here in Marshall, you will never have a reason to be afraid of us doing anything wrong because we will not tolerate it.
"What you're hearing, when we stop you, just follow along with us and everything will be fine," he said.
at 12:33 PM