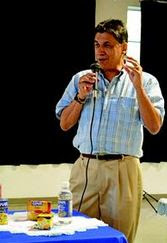 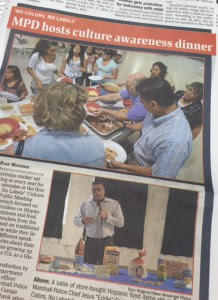 Join us at NCNL.org and help the Marshall Police Department put an end to the preconceived notion that the police are racially motivated.  It is human nature for people to criticize what we don’t understand.  It is the goal of the MPD to show the community that we serve that we are not the enemy and that only by working together will we move forward. MPD “Putting Our Community First.”
The Marshall Police Department and the No Colors No Labels Initiative will be hosting the second Cultural Awareness dinner on November 10, 2015 from 6 p.m. to 8 p.m. at St. Joseph’s Catholic School Cafeteria.  The Cultural Awareness dinner will focus on the traditions of the African-American culture.
The following is a story written by the Marshall News Messenger after our first Cultural Awareness dinner which focused on traditional Mexican/Hispanic foods and customs.
Written by Ryan Wagoner
A Palerindas sucker sat waiting at every seat for each attendee at the first "No Colors, No Labels" Culture Awareness Public Meeting Wednesday, which focused on educating attendees on Hispanic culture, traditions and food.
About 40 attendees from the community dined on traditional Hispanic cuisine while they listened to three different speakers tell their stories about their varied experiences growing up and coming to the U.S. as a Hispanic person.
After a brief introduction by Marshall Police Department public information officer Becky Holland, Marshall Police Chief Jesus "Eddie" Campa took the podium to thank attendees, the Marshall Elks Lodge and other sponsors for their help, and offer his comments on why the event was being held.
"Thank you for joining us this evening for our first cultural event," Campa said after grabbing the mic and moving the stand behind him - a regular habit of his before speaking to an audience. "I do see a couple of new faces here tonight … I know Becky has been hounding you guys and me for months about this event, so I'm excited about how this turned out.
"People criticize what they don't understand or don't know," Campa said. "When I first got here I was told people thought I was going to put a taco truck in front of the police department … or that I was placed here by the cartel to funnel drugs from Mexico through Marshall. It's amazing how people will criticize and talk about things when they have no idea what they are about."
When everyone had settled down with full plates, the first speaker of the night, Jose Alonzo, a Spanish professor at East Texas Baptist University, took the podium.
Alonzo, who is originally from Honduras, focused on how U.S. politicians and others use generalized terms that don't address unique cultures when describing Hispanic people, or when they refer to the continents of North and South America.
"There are 20 or so different Latin American countries, but people think anyone south of the border is just 'Mexican,'" Alonzo said. "Anyone brown is 'Mexican.' We need to make sure to teach our kids that America is a whole continent that also has 20 Latin American countries, all of which have different ideas in regards to culture."
Alonzo hadn't experienced any major incidents of racism personally since coming here, he said, and attributed that to his attitude when dealing with different people and the advantage of being educated.
"Education is extremely important," Alonzo said. "If you are well-educated, people will respect you, no matter what."
Next up to speak was Juanita Cantú, who has taught at Marshall ISD. Cantú spoke about the discrimination she felt growing up in her hometown of Sanderson during the late 1950s as a third generation Texan with a Hispanic background, and how that initially shaped her perceptions of her own culture.
"In my little hometown, you were either an Anglo, or a Latin," Cantú said. "When you filled out forms, it said 'white and non-white.' We went to school all together, but we had three classrooms. One was for all the 'Mexicans' who did not speak any English. The other class was for those Hispanic children that knew some English, and then there was one for all the Anglo children."
It wasn't until after her first year of college when she visited her uncle in Illinois - and ended up staying - that she felt unburdened by her heritage, she said.
"His neighborhood was mostly all white. His wife (was) Polish and she was not as outgoing as my uncle was," Cantú said. "People though my uncle was just wonderful and they loved him even though he was Latin. That helped me to get out of the mindset of just considering myself as Latin."
Blanca Jenkins, the last speaker of the evening, shared her story of coming to the U.S. at the age of 19 in 1994, knowing no English, to go to boarding school, and also talked about why something as simple as cooking tamales can be a bonding experience for Hispanic families.
"It was a blessing that I learned English," Jenkins said, echoing Alonzo's sentiments of attitude and education as factors for her success in the U.S. "It has opened many doors for me. Whenever I am with Hispanic friends, I always tell them they need to learn English, and I when I am with my Anglo friends I tell them how learning English was a huge task. We need understanding on both sides."
After a few questions from the crowd, Campa closed the dinner by informing attendees that the next quarterly cultural meeting for NCNL will focus on aspects of African American culture.
at 7:56 PM