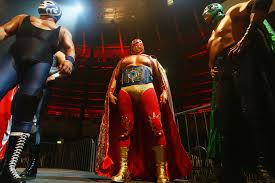 Jesus Eddie Campa, a local promoter of lucha libre, or masked Mexican wrestling, hasn't yet seen "Nacho Libre," the new Jack Black flick, but he knows what he doesn't want to see in it.
"The stereotype I'd like left out of the movie - and out of the sport itself - is when people think 'lucha libre,' they think of a short skinny guy flying around or this big fat guy that can't move," Campa said. "If you look at my wrestlers, they're actually pretty bulky and fit."
"Nacho Libre," which opens this weekend, stars Black as a tubby Mexican monk who secretly wrestles professionally. He has an ultra-skinny sidekick named Esqueleto. Hmm. So much for no stereotypes.

Lucha libre, with its acrobatics and good-versus-evil theatrics, is a cultural pillar in Mexico only rivaled by maybe soccer and Catholicism.

And for obvious reasons it's a hit in El Paso, too. At least two organizations, Lucha Caliente and the Alliance of Lucha Libre Wrestling Association (ALLWA), regularly hold matches in town.
Campa heads ALLWA, which has 18 regular wrestlers plus others who tussle every other weekend at the County Coliseum.  Several ALLWA luchadores will be at Tinseltown for the "Nacho Libre" opening on Saturday and Sunday, mixing it up in an honest-to-god wrestling ring while moviegoers wait in line.

So what's Campa's verdict on the movie's authenticity, based solely on trailers?
"From what I've seen, it does have the good versus the bad," Campa says. "It does have actual luchadores portraying the wrestlers, so it will display the sport well insofar as showing the athleticism that's needed in the sport. They've got the costumes and the masks; it stays with tradition."

The New York Times traced that rich tradition in a recent article.
Kick-started in the 1930s by an American businessman spreading the good word of pro-wrestling, lucha libre in Mexico took on a life of its own - replete with facemasks, Manichaean battles and gravity-defying jumps.

Luchadores became pop-culture superheroes, and people of all ages and both genders now flock to the matches, where they scream and shout at the wrestlers.
Richard Montoya, a Mexican actor who plays a monk in the film, vouched for the movie to the Times.

"I think a lot of Mexicans will find the real Mexico in this film," he said. "Besides, it seems every time a Mexican puts on a mask, it changes the world. Zorro wore a mask. Subcomandante Marcos wears a mask. There seems to be something Mexican about the individual who dons the mask but represents the masses."

The sport may be distinctly Mexican, but "Nacho Libre" is a sign that it's becoming mainstream in the United States, Campa says.

"I'm a wrestling promoter. With my crowd, I've seen more Anglo people and more black people coming to the show than they used to," he says. "I think it's turning around."
What does he hope audiences learn from the movie?


And some things just transcend cultural barriers. For instance, Jack Black flexing his butt muscles only to slurp up his pants into his crack.  You'd have to be an alien to be unmoved by that.