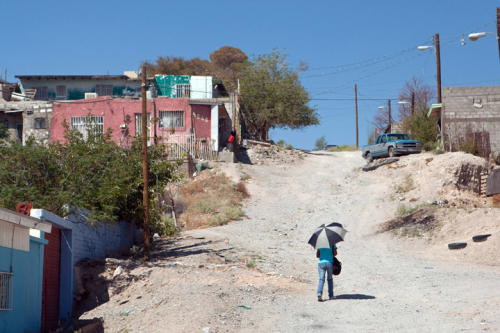 Chairman Coleman and Committee Members, I am pleased to be with you today to discuss the population growth in the unincorporated areas El Paso County and how it affects law enforcement.

New developments
Over the past few years El Paso County has seen a major increase in the population of the unincorporated areas, and with the increase in population there has also been an increase in the growth of business. The colonias of El Paso County are home to thousands of people who reside in conditions that would be unacceptable anywhere else in the county and for that matter in the country. Colonias are not only a local issue but become problems of national and international importance as the economic development of the border increases as a result of the North American Free Trade Agreement.
Colonias are communities that lack basic infrastructure such as water, sewer, natural gas, medical facilities, paved roads, street signs, lighting, and proper drainage. Colonias are also affected by high unemployment, high poverty rates, inadequate job skills, low educational attainment, inadequate public transportation, environmental issues and substandard housing, which are all prime examples of the broken windows theory.  The broken windows theory is a criminological theory of the norm setting and signaling effect of disorder and vandalism on additional crime and anti-social behavior. The theory states that monitoring and maintaining environments in a well-ordered condition may stop further vandalism and escalation into more serious crime.
Dilapidated homes and a lack of basic necessities make many colonias an ideal place for the proliferation of crime.  With the increase in population Deputies have less time to provide area patrols and must focus more on being reactive as opposed to proactive.  This has caused a decrease in the application of the theory of community policing.  In 2009 the El Paso County Sheriff’s Office opened the Sparks Sheriff’s Office Community Center.  The center was to become a recreational center of sort where children could come and play basketball or use the computers for school work.  It was a place where adults could come to and seek the advice of a law enforcement officer.  In reality it became a ghost center.  The reason for this is due to the lack of trust and faith that those living in Colonias have in the overall system.  From law enforcement view point the solution is easier said than done as it would require the federal government to fund and establish more COPS hiring grants that would provide outreach sources such as the hiring of Community Resource Officers assigned the primary duty of patrolling, educating, and building the foundation for trust.

Colonias and what we face
As a result of the lack of codes and guidelines the colonias are the perfect place for not only residents of the colonias, but also those that live outside of them to use them as illegal dumping grounds.   These cause a major environmental issue for all of us.  Illegal dumping is not limited to just to tires and trash, but also in dumping of hazardous materials that can make individuals ill and cause a major health concern for the community.  What is needed to correct this issue is the authority from the state Constitution to allow counties to establish building codes or planning and zoning boards, and the ability to enforce any and all violations and the funding to provide the needed staff to do so.  The government at all levels needs to provide for funding of local Environmental Enforcement Unites that can patrol the unincorporated areas in order to prevent illegal dumping.
Because there are no building codes or ordinances in place for colonias law enforcement faces the issues of not being able to respond in an adequate time frame to a call for service due to no street signs, premise numbering, unserviceable roads, and lighting conditions. It is because of these issues that those that reside in the colonias have a distrust of law enforcement in general, as they feel that we have abandoned them in their time of need and don’t understand that we didn’t arrive in time because we could not locate them.  Again what is needed is the ability to establish and require the basic infrastructure needed in order to establish a community and to hold those that take advantage of the less fortunate accountable for their actions.  Simply providing funding for street signs, funding for providing accessible roads, and funding for establishing illegally subdivide plots into legal recognized subdivisions of the community in order to be able to map them correctly on CAD.

The biggest issue facing us in LE in the colonias is the amount of domestic violence that goes unreported because of a fear of deportation or the possibility of arresting the only provider in the family.

Thank you for giving me the opportunity to testify.