Flakka the Drug, by David King 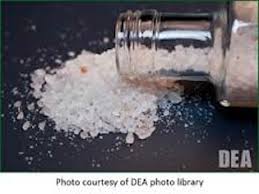 Marshall Police Chief Jesus “Eddie” Campa has issued a warning about a new synthetic drug that has made its way into Texas.The drug, known as flakka, initially reported as hitting the streets of Florida, has made its way into Texas according to a report earlier this month from the North Texas Poison Control Center at Parkland Hospital in Dallas.Flakka, also known on the street as “gravel,” which comes in crystalline rock form, can be swallowed, snorted, injected, or used in an e- cigarette and vaped.Though there haven't been any reports of the drug in Marshall as of yet, Chief Campa warns citizens to be on the look-out as flakka can cause fatal side effects, which include agitation, incoherence, violent behavior, increased strength; increased body temperatures (up to 105 degrees) and paranoia.
at 5:05 PM