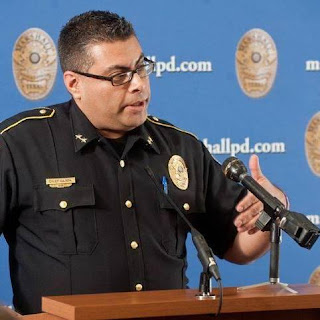 Jesus "Eddie" Campa became the chief of police for the city of Marshall in August of 2014.

According to an article in the Marshall News Messenger, Campa was appointed as the permanent MPD chief in June.

He comes to Marshall after retiring from a 15-year career with the El Paso County Sheriff's Office.

After retiring, Campa took a temporary position with the Ector County Independent School District while seeking a more permanent position.

He is a family man, happily married to his wife, Rachel and loves his three children.

As a chief, recently, due to some changes he has implemented in the Marshall Police Department, he has taken some hits to his character from people who it appears do not like change.

So, there are four of us who decided to stand up for him and support him in light of the current darkness that follows him. We not associated with the Marshall Police Department or Chief Campa.
at 10:34 AM